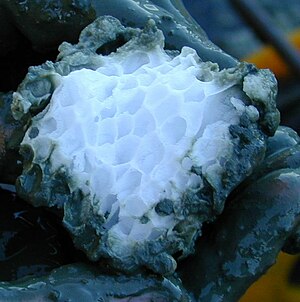 Specific structure of a gas hydrate piece, from the subduction zone off Oregon

Gas hydrate-bearing sediment, from the subduction zone off Oregon 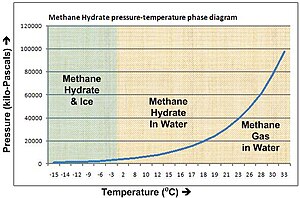 Shows how the hydrates decompose as temperatures rise. The amount of methane gas released into the surrounding water column or soils increases as the ambient temperature increases, figure based on graphic from Osegovic et al[1]

Shows how the hydrates decompose as temperatures rise. The amount of methane gas released into the surrounding water column or soils increases as the ambient temperature increases, figure based on graphic from Osegovic et al[3]

This covers primary research from 2012 and earlier and is likely out of date.

Would be good to have a section on "the original Clathrate Gun Hypothesis" and use some of this material there, but as it is, risks confusing the reader by suggesting this material is still valid, contradicting the rest of hte article.

Don't have time to rewrite it just now so have removed it and will look into writing that section later. Thought better to remove than to leave it in place and potentially mislead the reader with out of date findings.

Another kind of exception is in clathrates associated with the Arctic ocean, where clathrates can exist in shallower water stabilized by lower temperatures rather than higher pressures; these may potentially be marginally stable much closer to the surface of the sea-bed, stabilized by a frozen 'lid' of permafrost preventing methane escape.

The so-called self-preservation phenomenon has been studied by Russian geologists starting in the late 1980s.[4] This metastable clathrate state can be a basis for release events of methane excursions, such as during the interval of the Last Glacial Maximum.[5] A study from 2010 concluded with the possibility for a trigger of abrupt climate warming based on metastable methane clathrates in the East Siberian Arctic Shelf (ESAS) region.[6]

Euxinic (i.e. sulfidic) and anoxic events happened in the past on different time scales ranging from decades to centuries (from impact events) or through climate change within tens of thousands of years or a few million years. According to Gregory Ryskin, such a scenario could lead to the release of methane and other gases (e.g., CO2, Template:Chem/atomTemplate:Chem/atomTemplate:Chem/atom) into the atmosphere, from the ocean. Following atmospheric methane excursions he postulates explosions and burning of methane would produce lots of smoke and dust, which would first lead to global cooling.[7] And likely after a relatively short geological period following stratospheric cooling, global warming would take over.

A study of the effects for the original hypothesis, based on a coupled climate–carbon cycle model (GCM) assessed a 1000-fold (from <1 to 1000 ppmv) methane increase—within a single pulse, from methane hydrates (based on carbon amount estimates for the PETM, with ~2000 GtC), and concluded it would increase atmospheric temperatures by more than 6 °C within 80 years. Further, carbon stored in the land biosphere would decrease by less than 25%, suggesting a critical situation for ecosystems and farming, especially in the tropics.[8]

A trapped gas deposit on the continental slope off Canada in the Beaufort Sea, located in an area of small conical hills on the ocean floor is just 290 meters below sea level and considered the shallowest known deposit of methane hydrate.[9]

Seismic observation (in 2012) of destabilizing methane hydrate along the continental slope of the eastern United States, following the intrusion of warmer ocean currents, suggests that underwater landslides could release methane. The estimated amount of methane hydrate in this slope is 2.5 gigatonnes (about 0.2% of the amount required to cause the PETM), and it is unclear if the methane could reach the atmosphere. However, the authors of the study caution: "It is unlikely that the western North Atlantic margin is the only area experiencing changing ocean currents; our estimate of 2.5 gigatonnes of destabilizing methane hydrate may therefore represent only a fraction of the methane hydrate currently destabilizing globally." [10]

Shakhova does high quality research published in Nature and these are cited.

The MDPI papers look respectable but have has almost no peer review. You can tell by the timeline - they are published only a few weeks after they were submitted without the time needed for a proper peer review. You can also tell by the papers. For instance one of them says that the last ice age ended 12 years ago - surely a typo but even the most basic peer review would catch a typo like that.

They briefly mention that they have been criticised but do not explain what the concerns were or answer them. MDPI has a reputation for lax peer review and these papers support that reputation. I did a draft post here to explain the issues - until these issues are fixed, if they ever are, there is nothing here to summarize in an article that covers well supported peer reviewed research.

Retrieved from "https://doomsdaydebunked.miraheze.org/w/index.php?title=Talk:Clathrate_gun_hypothesis&oldid=4453"
Cookies help us deliver our services. By using our services, you agree to our use of cookies.